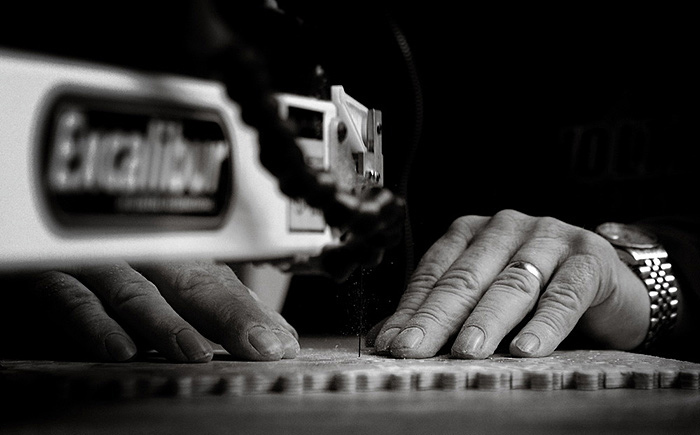 Dave Evans of Weymouth is the man that attempted to make the world's largest man-made jigsaw puzzle. He succeeded and ended up in the Guinness Book of World Records with a jigsaw containing 40,000 pieces. It was created to celebrate the Queen's Diamond Jubilee in 2012

I was lucky enough to see Dave Evans of Guest Book Puzzles in action as he prepared for the Guinness World Record attempt at the largest ma​n-made jigsaw puzzle ever made.

He was being filmed by the ITV camera crew as he showed off his skills as a true craftsman of the Jigsaw and man was he fast! Both myself and the ITV cameraman asked how he had kept his fingers for this long…

The puzzle that Dave expects to make is around 40,000 pieces. It will be made up from 32 photos taken during the Jubilee year. Buckingham Palace have confirmed that the incredible puzzle will be exhibited at Sandringham Estate this summer. This is alongside 100,000 cards sent from the general public to commemorate the Queen’s Diamond Jubilee.

The jigsaw will take around 10 hours a day for three weeks to complete!

The images for the jigsaw have all been donated by both professional and amateur photographers giving up the royalty rights simply to be a part of this grand occasion. I will be back on Wednesday to photograph the first cut along with the crowds expected to attend the event at Brewers Quay in Weymouth, Dorset at midday on the 20th March 2013.

After photographing the “first cut” at the official launch of this amazing record attempt, I was really happy to hear that the jigsaw had been completed. However, a few days ago I heard that the whole thing had collapsed!

You can see this in the video below. Apparently, Dave Evans (the creator of the jigsaw) was distracted by someone as he adjusted the puzzle and bosh! The whole thing folded in on itself and crumbled.

I have to ask myself why wasn’t this thought through with a little more care. After all, it is obvious that all that weight, and the angle it was at, was bound to give at some point.

Still, there is a bright side. Dave had already photographed and recorded the event enough to secure the record with the Guinness Book of Records. But still, he now has just a few days to restore the jigsaw puzzle back to its original state before taking in to Sandringham.

Good luck with it Dave and if anyone in the area is willing to help, please pop along to the Brewers Quay in Weymouth to show your support!

The Jigsaw at Sandringham

Thankfully, the story has a happy ending and Dave, with jigsaw completed, finally made it to Sandringham!